Corsair is recommended as one of the most outstanding CPU cooler manufacturers. Choosing a perfect one for your device from its diverse range of high-performing coolers can get very confusing.

A good discussion on their comparisons can get you out of this dilemma. Keeping that in mind, we’re presenting a much-needed comparison here among Corsair H100i vs. H150i vs. H115i. What will your choice be?

Corsair Hydro series coolers are top-performing AIO or all-in-one hydro coolers. The differences in their operations are based on their technical features. Among them, the H150i might attract you with its massive radiator, while the software integration of H115i is unlike any other. H100i also doesn’t fall that short in its simple design.

Nevertheless, their price value might not be budget-friendly. So, to get the best buy, comparisons are extremely important.

Corsair Hydro Coolers have gained their name and fame through their excellent performance. Each model version launched by the manufacturer throughout the years has won the hearts of users as well.

H100i, H150i, and H115i are the most discussed models of their supreme hydro cooler series.

All of the three coolers consist of a radiator made of Aluminium and a copper CPU block, promising to provide top-notch performance.

They have their unique features as well, and in this article, we’re going to dive down into a detailed comparison and provide our verdict to help you make the best decision.

And before we get into exploring the features and other factors, it’ll be helpful to get a quick overview and create a mental image of them.

So, Let’s get started! 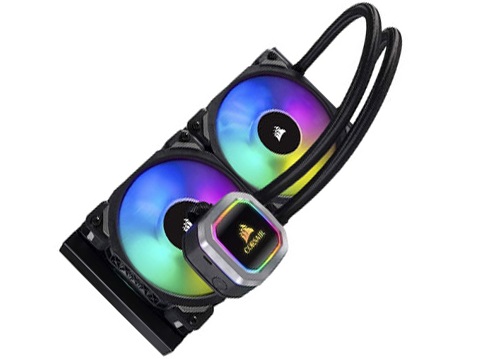 If you’re someone who prioritizes convenience, the H100i just might be your favorite for its ultra-simple design conveying high performance.

It ensures good static pressure for its use of low pitch blades.

Durability and lower noise control are attractive aspects of the H100i.

Synchronizing with system memory and graphics card is appreciable as well.

The Corsair Link monitoring tool can be used alongside it, and it’ll enhance performance a lot more.

Overall it’s a reliable cooler with an easy installation process but you might have to get a little over budget to buy one. 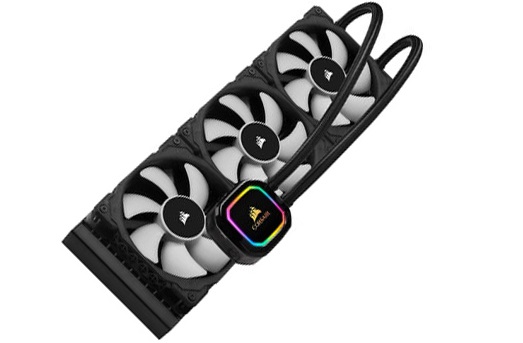 The most attractive feature of this liquid cooling system is its silent operation and heightened cooling capacity.

It includes three ML series 120 mm fans that are equipped with magnetic levitation.

Ultra low noise performance due to its 360 mm radiator is much appreciated. You’ll get to monitor and customize all of the functionalities using the bundled software H150i offers.

The installation process is straightforward since no tool is required.

So you get a cooler that provides a superior form of thermal performance along with a great degree of clearance.

Although H150i is loved by users, it’s a lot pricey for sure. 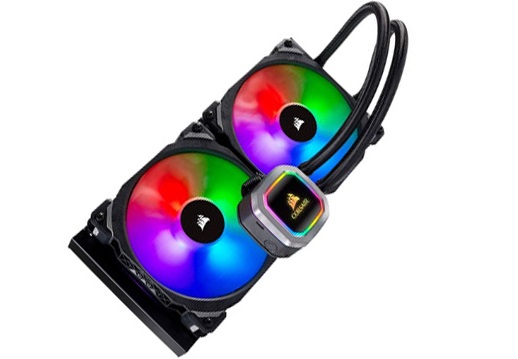 Corsair H115i is the next-level version of the H100i one. It’s renowned for smooth software comparability and memory clearance.

It’s a comparatively stronger, cooler pump than its older versions. Users with CPUs that are highly overclocked go for this one.

LED and cooling performance can be easily controlled for its absolute integration with Corsair iCUE and other software.

H115i provides a remarkable cooling system and fan-built quality, but users have expressed that it can get very noisy during high-speed functionalities.

One drawback would be this cooler is on the expensive side.

Now let’s dive down a bit more on the comparisons!

Top cooling performance and convenience in connectivity are the key qualities hydro cooler users look for. But it surely doesn’t end there.

For all of the three models, we’ll find header cables for internal USB and all the necessary items for connecting them with the CPU socket.

Installation is easy with a modular along with a tool-free mounting bracket.

H100i comes with a three-pin connector which brings extra advantage. Within a simplistic design, high functionality is guaranteed.  It’s also accompanied by the Corsair Link control and monitoring tool.

H150i can work with almost every CPU socket, creating a convenient connection deal. However, their pumps are said to be excessively light which can get problematic.

H115i is known for its bold design.

Similar to H150i, it can connect to a wide range of sockets, which were not possible for older versions.

The cooling and thermal performance depend wholeheartedly on how speedy the fans and the pumps are at a given time. The radiator core and the power of the fans play a role here.

Let’s get an overall idea of it!

H100i has a 240 mm double-wide radiator. Within this radiator dimension, this is the best hydro cooler you’d find. And its two 120 mm fans that control static pressure.

The gigantic 360 mm radiator of the H150i works concurrently with its three 120 mm fans, two of which are PWM fans with magnetic levitation. It’s successful in maintaining a low-profile performance for keeping and working with an overall low temperature.

H115i provides the enhanced cooling surface area with a 280 mm radiator. If you have a CPU that gets overclocked on a higher level, this cooler consisting of dual SP140L PWM fans will have your back.

No one likes a noisy build. Corsair has taken this into account and adopted a zero RPM cooling system where the fans will stop working to reduce the noise level when the temperature is at a low profile.

The quiet operation of the H150i takes the crown here. Noise range has been tested to not have crossed any more than 25 dBA. How cool is that! Moreover, this silent operating technology provides enhanced cooling capacity.

On the other hand, both H115i and H100i create up to 37 dBa noise. Specifically, the H115i has a bad name for being noisy when the speed ratio increases. H100i has also been found to create noises due to high speed but not as much as the H115i one.

The Corsair iCUE software helps to control the RGB lighting of all the components compatible with iCUE, along with adjusting pump-fan speed and coolant temperature.

We’ll get to do all these in just a single interface.

H115i’s compatibility with Corsair iCUE is noteworthy. This software makes it easier to adjust the various features, be it the LED or the cooling system.

H100i and H150i can make use of the adjusting feature system, but they’re not as smoothly integrated.

So software compatibility-wise, H115i is the best option here.

RGB LEDs are an included feature for all of them. The H115i has the most use of Dynamic multicolor RGB lighting.

You’d also have the option to disable the lighting whenever you wish to.

All of the Corsair Hydro series models are pre-filled and provide a closed-looped system.

That means, you don’t have to follow through with any user maintenance procedure, and there’s no stress for refilling.

H100i can keep coolant evaporation under check. And that’s why it’s termed as one of the most durable models.

Along with H100i, the H115i and H150i mark durability, as well as their resilient material, are made to assist in leak protection and flexibility.

Which One to Choose: The Final Bargain

We’ve come to the very end of our discussion. The features and their working principles have been thoroughly compared among the three models.

It’s necessary to keep in mind that you shouldn’t get a new device just by being fascinated by the latest features.

Oftentimes, users end up spending a huge amount of money only to get unnecessary extra features.

And an excellent performance doesn’t always have to be super expensive.

What do you need for your PC? What is that one feature that you must have?

These are essential questions to ask yourself before you get a hydro cooler.

According to users and enthusiasts, there isn’t much difference in performance among the H115i and H150i,

A slight difference in performance level can be detected for the H100i one but it’s nothing concerning and works pretty well.

Overall, under a simplistic design, H100i is for sure a smart choice if you’re not opting for any other special extra feature. H100i can’t be used in extended devices, so as a CPU-only solution–this is the best option for you.

If you enjoy modifying all of your PC gadgets and want to go for a higher performance level, H115i, with its secured iCUE integration, might be the only hydro cooler you’re looking for.

A lot of people find it very hard to tolerate noise levels; in that case, H115i won’t be able to help you that much, but H150i can!

A lot of people desire to get additional fans within their hydro cooler and more extra power. If you’re one of them, the H150i one with its enormous radiator and an additional fan hits the jackpot in this case!

According to Corsair AIO Hydro cooler buyers, the H100i costs much less than the H115i and H150i ones.

If money isn’t a concern, you can go for the Corsair H115i cooler providing an enhanced cooling system and top-notch software compatibility.

However, users have expressed that both the H115i and H150i aren’t that satisfying when it comes to the price-to-performance ratio.

Most people want to stick to a budget and get the maximum high-functioning cooler under that amount.

If that’s the case, H100i is certainly the better option.

By now, we have an idea of the price range and if it aligns with our priorities.

Based on that, our final verdict would be going for the H100i one.

H100i has a reasonable price and provides every feature needed for a hydro cooler to work excellently.

No wonder, that the Corsair iCUE H100i RGB Pro XT has been crowned as the best hydro cooler of 2021 by users.

As the second-best candidate, we’d like to recommend H150i. The Corsair iCUE H150i Elite Capellix has been termed as the sixth-best cooler of 2021.

Even though the price is high, there’s no denying that this cooler provides the most mind-blowing set of features. So to some users, it’s worth the money!

Can I use any thermal paste on Corsair AIO hydro coolers?

The Corsair AIO coolers already come with a thermal paste and it’s suggested to use that one. However, there will be no harm in using the Arctic MX-4, this thermal paste is known to be of good quality.

The Corsair H115i has a 280mm radiator which the H510 case can support. If mounting is done properly, there shouldn’t be an issue with placing it.

Gaming requires a lot of power to be absorbed and used by the CPU to maintain its image and video quality.

The iCUE comes in handy to adjust the speed ratio and cooling system, and while doing so it does not affect any gaming performance negatively.

Getting AIO hydro coolers is a huge investment, and therefore just being aware of the latest model isn’t enough.

To make the right choice that stands for your best interest, comparisons among models like Corsair H100i vs. H150i vs. H115i – play a crucial role.

We hope this article will help you in making the best decision for your CPU cooling system. Good luck!