You are here: Home / Blog / Does Thermal Paste Expire? – The Whys and Hows

Right after applying the thermal paste to set your PC up, a common question can come to mind: “How long is this thermal paste good for?” Well, I feel you. Even though the compound isn’t usually that expensive, we’re often worried about longevity.

Personally, I think that every bit of information about PC hardware matters. Even if you’re sure, like all things, the thermal paste that you applied will go bad at some point. It’s best to know how it happens, and the possible time it can happen.

Not to worry, this whole article will give you an insight into the whole deal. Read on; you might just find it intriguing.

What Does Thermal Paste Actually Do?

We know thermal paste by many names. Some call it thermal grease, thermal gel, and so on. It’s basically the thick grey substance that helps to protect the heat transfer process between the CPU and the cold plate of the cooler.

The CPU surface, which is apparently even, has microscopic gaps that hinder proper heat transfer. These tiny little gaps tend to trap air. They, in turn, act as insulators, which is really bad for heat transfer.

What the thermal paste actually does is, it fills up these gaps and ensures proper transfer of heat. So, after applying it, even prolonged sessions of heavy workloads become tolerable (From a thermal perspective). This prevents stutters and sudden system failures as well.

If someone asks you, “Do we really need thermal paste?” The answer would be a big YES.

How Does Thermal Paste Expire?

Yes, it does expire. But we can’t really finish the discussion here and now. It’s best to explain the reasons behind it. So, let’s start.

Stored thermal paste can go bad really fast if you keep it under extreme heat or cold. It’s best to keep it in an airtight storage. Keeping the paste container in a zip lock bag is a good idea. You wouldn’t want air to pass and oxidise the gel.

I’ll be honest here; high-end gaming PCs tend to dry thermal paste faster than a home desktop. The higher the heat a CPU generates/ higher the CPU usage, the lesser the chances of thermal paste to last.

How to Remove Thermal Paste 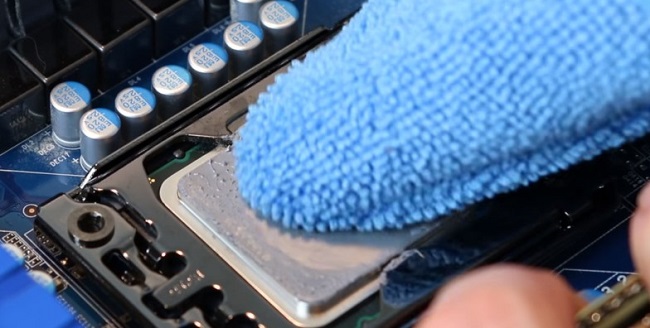 How Often Should It Be Applied?

Thermal paste is often applied when there’s a need for hardware change. The CPU swapping usually takes place before the thermal paste usually expires. However,’ let’s talk about the common scenarios where it is and should be applied.

It’s not uncommon to find faulty hardware in your PC. Who knows? It can just be your CPU. Just to check if it’s ok or not, you might want to get it out of the socket and reinstall it after some cleaning. That’d be a time when you’ll need to reapply the thermal compound.

As we all know, a single socket can support a wide range of CPUs. Just in case you want to go in for an upgrade, you might want to swap your old CPU with the new one. You HAVE to apply thermal paste again in this case as well.

Well, this one is pretty darn obvious. While building a new PC, you won’t be doing it without applying some thermal gel, I presume. Just don’t apply too much out of excitement.

If you’re facing constant CPU overheating issues, reapplying thermal paste might solve the issue. The paste doesn’t really dry up easily. So, this scenario is rather rare.

Now that we’ve covered the basics. Let’s resolve some common questions regarding the expiration of thermal paste in general.

Is too much thermal paste bad?

Yes, it can prove to be harmful for your system. It may interrupt proper heat regulation between the CPU and the cold plate of the cooler. Plus, if the compound is metal-based, it can cause short circuits by overflowing onto other parts of the PC. Especially the motherboard.

How do I know if thermal paste is still functional?

Just check the CPU temperatures on a frequent basis. If there’s no drastic change or flux in the thermal performance, your old thermal paste is probably still doing its work just fine.

How much impact does changing the thermal paste have?

Well, I believe we’ve covered all there is to know on the topic. Bottom line, “thermal paste expires.” But I guess you know the reasons behind it. Also, I’ve given tips on what to do once it does. Some extra thermal paste can be really useful to have. You never know when you might need it.

No point in talking about it any further. Hope you got the answers to all the relevant questions. Wrapping it up for the day. Hope you had a good read!