You are here: Home / Blog / How Much Storage do I Need for Gaming: All The Things You Should Know About It

When it comes to building a gaming PC or buying a gaming laptop, each & every decision is vital, and you need to do a lot of thinking about that. It’s not just the GPU, RAM, and processor that ensures a good gaming experience. You need to be thoughtful about getting the right amount of storage space too!

If you’ve ever been in the same shoes as me, you’d know why I’m saying all that. Imagine a 30 GB file stops downloading at 90% just because you don’t have enough space. Also, imagine not being able to install a game just because you have insufficient disk space. Yup, that’s exactly what I’m talking about!

So, let the quest begin!

If you’re more or less into gaming or you’ve kept yourself updated with the gaming world, you’ll see that it has changed a lot in the last decade. Now ask yourself, ‘what changed’? Well, the answer is ‘everything’. Let me be a little more specific. That’ll help you to understand what you’re getting into.

Along with all the basic things, I think it’s the realistic graphics, smooth gameplay, hell lot of gaming hours, a good storyline, and most importantly, the DETAILS that make a great game. A detailed story makes a gamer feel attached to the game and its character. This thing takes the game to the next level!

A little more of everything surely seems nice, but that means a little more gaming specs too. That definitely includes a lot of storage space for the games, and that’s the catch here! Let’s put it this way if you want a house with a pool, garden, and all the other things, then you definitely need a huge plot too!

Speaking of game size, most of the hyped games these days need at least 50 GB of free disk space that can go up to 100+ GB! You can search online for the biggest PC games, and the sizes will surely make your jaw drop. That’s pretty much the scenario of the gaming world nowadays.

What’s the ‘Must Have’ Storage Capacity for Modern Gaming? (Based on Gaming Style)

When I say modern games, I mean the AAA (triple-A) games, of course. In case you’re new to the gaming world, the recent part of this writing should give you a brief idea about the games and their sizes. Taking that into account, let’s see how much storage you need for gaming –

If you’re really aiming for complete gaming specs, then 500 GB is the starting line for drive space. This amount of space is convenient for someone who’s just starting and wants to play games every now and then. If you’re thinking about going for any less than 500 GB, I’d say that’s definitely a bad idea.

The necessary files in your PC or laptop can take up to 60/70 GB sometimes. Then again, we like to store video files, photos, and much important software in our drive. Now, if a single AAA game takes 25 GB at the least, how much space are you left with? Not much, I guess!

So, think twice about whether it’s really enough for you or not.

Even if you think that 500 GB is enough for you, at some point, it won’t be. Once the storage starts getting full, you’ll have to think about upgrading that. But the problem is, you won’t be able to add another 500 GB to your existing one. That’s why it’s always wise to go with 1 TB in the first place.

1 TB disk space is the standard amount of storage space for gaming. You can install a decent number of top tier games on your PC or laptop if you have this much disk space. That’s like the ‘go-to’ size when it comes to getting a gaming setup. I suggest people get at least 1 TB of storage space for their build.

Having a 1000 GB storage space means you don’t have to worry about getting rid of old files or games any time soon, just because you want to install a new game. That’s quite a relief if you ask me!

2 TB storage space is for those who are genuinely a gamer! By the term ‘genuine gamer’ I mean, someone who spends pretty much 10-15 hours (a week) in gaming, streams their gameplay online and plays a game whenever it’s available to play.

Pretty much all the gamers prefer to have 2 TB storage space for their setup. The best thing is, it’s affordable and definitely a great deal for the money. If you make a ratio of the size and the price, you’ll see that the price has significantly decreased.

Roughly measured, you can play at least 15-20 huge-sized AAA games and still have enough free space for other things if you’ve 2000 GB of storage space.

3 TB means a whopping 3000 GB disk space! That’s kind of rare to have, but it’s absolutely perfect for the gamers who like to collect games. Speaking of which, with this capacity, you will be able to keep all of the top 10 biggest games of all time on your computer. How insane is that!

Storage space more than 3 TB seems rather unnecessary to me. However, if you want to record and store your hour-long gameplay every time, this seems like a good deal to me. Also, if you get one of these, you pretty much won’t have to worry about getting a new one in almost a decade!

SSD or HDD, Which One to Go With? 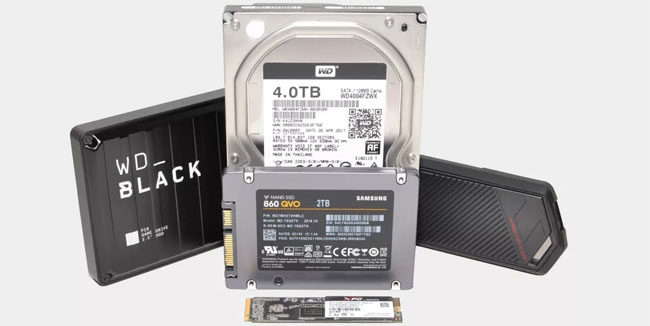 There are mainly two options when it comes to choosing the storage drive for your gaming setup. Whether it’s the SSD or HDD, their purpose is the same, which is storing data. It’s their way of functioning that makes them different. Now let’s see what’s what and which one is better –

HDD is still the most used storage drive for PC and laptop users but these days it’s not that preferred for gaming. The thing is, hard disk drives make your PC or laptop pretty slow. For example, if you’ve an HDD equipped in your setup, it’ll take longer to boot your device and load things.

However, if you’re willing to overlook one or two things, going with this one can actually save you a lot of money. So, if you’re a little tight with your budget, you can cut some corners here. You just need to make sure that the disk drive is fast enough to play along with your other specs.

SSD or solid-state drive comes at almost twice the price of an HDD of the same capacity. That seems like a lot, but that’s absolutely worth every penny. Integrated circuit technology in SSD allows it to function more efficiently than an HDD, not to mention it takes a lot less time for booting.

SSD adds extra speed to your gaming experience. All gaming laptops and PCs these days come with SSDs instead of HDDs. Some people often cut the budget with RAM to get an SSD because it makes your device fast (definitely not like the RAM does!) as well as ensuring storage space.

I think it’s too easy to say that an SSD is the best choice here and to be honest, it REALLY is! But the thing is, the price is a big issue here. If someone has a budget issue, they should think about the speed only after ensuring enough disk space first. So, I guess the right choice can vary from person to person.

I’ve already answered this common question, ‘how much storage do I need for gaming’. It’s pretty much like a straightforward equation, but there is an important variable, which is you! Take that into account, and the whole thing will get a lot easier. Let me make this clear for you.

All the information that I’ve provided here mightn’t be too helpful if you can’t decide what’s best for you. Figure out how much time YOU can spend for gaming in a week and divide that by 4 (least hours per game). The number you’ve is the highest number of games you’ll play until one of them is finished.

This way, you can decide the least space you should have for gaming at a time. Now, going for this storage space might seem like the best choice for you, but this way, you’ll have to suffer sooner or later because you’ll need to delete old files every time you want to play a new game.

That’s why getting at least 500 GB or 1 TB storage space is the smart choice in any scenario.