You are here: Home / Computer Case Advice / How to Install PC Case Fans – The Ins and Outs

At this day and age, gaming pcs are common. Everyone wants his/her own personalized Super Computer so to speak. Imagine a Power-Hungry setup that eats your electricity bills alive. It’ll cut your wallet into half if you’re not careful.

What’s scarier is the fact that these jumbo pcs get hotter and hotter the more you take them for a ride. I’ve seen machines become bore pits after five hours of gaming.

Don’t get me wrong! The motherboards inside have heat sinks. GPUs have fans (three of them now), and a bunch of cooling mechanisms in place. But there’s a catch!

The guy who sets things up, did so backwards. Now, instead of getting the hot air out of the system, the fans put it back in. What do you think would happen?

The pc will boil, my friend. It’ll boil till it bursts. That’s why you need to know how airflow works inside the casing after installing it. Also, you’ll have to know how to install pc case fans the right way for ideal airflow.

This is what I’ll be teaching you in this article of mine. Read on!

There are few things to keep in mind before we get to the brass tacks. These things are crucial because they directly affect the way we install the case fans. 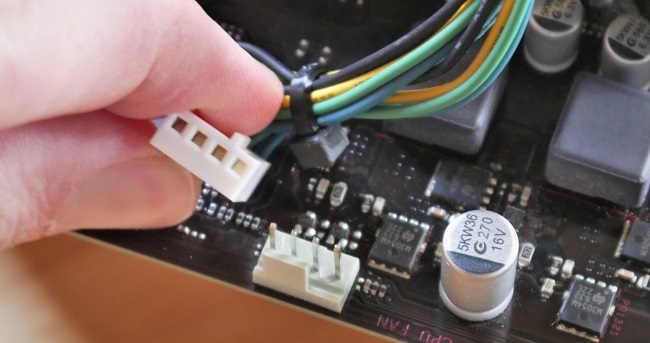 This probably isn’t applicable if you’re adding extra fans to PC case, as you know what you need. However, if you’re doing this for the first time, it’s necessary to keep the fan’s connector in mind.

These days, most fans use three or four-pin connectors. You can also find products with Molex, but those aren’t the best path forward. Now, your motherboard should support more than one type of connector, but you should still double check.

It’s also possible to connect your fans to the power supply, but I’d suggest not to. It’s always preferable to connect them to the motherboard, as it’d allow you to control the speed. If you’re bothered by fan noise, this is even more crucial.

Let’s say you have an 80mm and another 120mm case fan. Which one should you opt for? As a rule of thumb, it’s always better to opt for the larger fan (unless, the smaller one is significantly better in quality).

Bigger fans move more air in or out with each revolution and have higher CFM measurements, which results in better cooling performance. Furthermore, they don’t need to spin as quickly as the smaller fans, making the overall experience quieter.

How to Install PC Case Fans, I Mean the “Right” Way?

Now that we know the ideal options for optimal results, let’s get started with the installation process!

Step 1: Unplugging and opening up the computer

The first step is to unplug your computer from the wall. That means you should keep yours disconnected if you’re yet to connect it.

Once you have unplugged it, press the power button for a few seconds to discharge any possible remaining power.

Now, remove the screws to get the side panels off. This method can largely vary depending on the case manufacturer and the product’s model. Usually, the open side (the side of the motherboard you can work on) will be on the left.

It is possible to damage your computer with the built-up electrostatic discharge. Hence, I’d suggest grounding yourself by touching a grounded metal object. You could also use the wrist straps made for this purpose, but that’s certainly not mandatory.

If you need to replace a faulty fan, this is the time to get the old one off. Firstly, find out where the fan is connected. It might use a Molex connector or 3-pin/4-pin headers. They should be wired to the motherboard in most cases.

Once you have unplugged the connectors, it’s time to unscrew the fans. Usually, a Philips head screwdriver should suffice for this purpose.

Step 4: Figuring the position out for the new fans

Now that we have a clean slate, we need to determine where to put the fan(s). If you have only two fans, you should use them in a push-pull configuration. That means one fan will pull the air in, while the other will act as an exhaust.

If you have more than two, you can add another to the front of the case. Keep in mind that the fans in the front should act as intake fans, while the one in the back should be the exhaust. Many people add the extra fans on the front near the HDD bay, which is a solid option.

There are no rules set in stone, but these configurations have been tried and tested over the years. You can switch it up if you know your business and have something specific in mind.

If your case supports fans on the top, I’d recommend using them as intakes too. Although many people prefer setting the top fan as an exhaust, it can backfire and create a significantly negative airflow. This mostly depends on the rest of the fans.

When it comes to side fans, you can use them as both intakes or exhausts, depending on the PC case.

After determining which fan goes where, all that’s left is installing the fans on the case. Remember to try to keep the fans’ cables out of the way and tucked away. That’s because they might come in contact with the fan blades, resulting in rattling sounds or worse.

Using zip ties (Verge flashback) can also be an option here. Moreover, make sure that you have the fans in the right direction. They’ll typically have some sort of mark to tell you which way the airflow would be.

Next, it’s time to screw things in. Fans may use typical screws to self-tapping screws, but the fundamentals remain the same. Hence, you shouldn’t have any trouble with them.

Now that we have installed the fans to the case, we can go ahead and connect them to the motherboard (or the PSU, if you’ve got too many fans to connect).

As I said, four-pin headers are the best option to use.

Regardless of what you’re using, the connectors are all keyed. Therefore, there’s little chance for you to get things wrong. If the wires don’t reach the connectors, it’s also possible to utilize Molex adapters and connect them to your PSU.

We’re done! Now you just need to close the case and connect the computer to try things out. If you used the four-pin connector, you could also test and configure the fans through your BIOS (UEFI) settings at this point. That process may differ depending on your motherboard.

Answering the Question Regarding Positive vs Negative Air Pressure

As you know, there are two ways to use the fan — intake or exhaust. That means it will either bring in cool air from the outside or push the hot air out. Now, you might think that achieving equilibrium in the balance should make things fine.

And that should work in theory, as we can calculate how much air a fan can move (through a measurement called Cubic Feet per Minute). However, that isn’t possible in reality, as the fans aren’t the intake and exhaust paths.

This is where the age-old debate of positive vs negative air pressure comes in. As you can imagine, positive means more air intake than exhaust and vice-versa. The thing is, there isn’t one best solution yet.

However, I can help you decide. I suggest most users have a somewhat positive pressure in their system, significantly reducing the dust and debris build-up. Of course, that’s not the only catalyst.

The direction of the airflow and the overall fan placement will also play a role in it. Nevertheless, negative air pressure can make things run slightly cooler, but the tradeoff is that the case typically needs cleaning more frequently.

As you can see, learning how to install PC case fans does require a bit of know-how. You need to calculate the ideal placements by judging your case, the components, and the fans themselves.

However, things become much simpler once you figure the quirks out. Try to keep a slightly positive airflow if you aren’t sure, and use the four-pin headers to get the most out of your fans!