You are here: Home / Blog / 12 Different Parts Of A Computer You Must Know About

Computers are the greatest invention of the modern world. They’ve revolutionized different fields such as science, research, medicine, and much more. People’s lives have become so much easier, thanks to computers.

In 2021, this modern invention is now an important part of everyone’s life. Today, to familiarize yourself with them, we’ll talk about the different parts of a computer in this article.

By knowing how a computer is made and its various parts, you’ll be able to marvel at the beauty of a computer and use it with much passion. Without further adieu, let’s get started.

12 Different Parts Of A Computer

A computer consists of mainly 6 parts — a monitor, processor, memory, storage unit, graphics card, and motherboard. Without these components, a computer wouldn’t be complete; thus, these are the must-have essentials.

Now let’s take a look at each of them in detail.

The monitor is the device that displays different outputs from a computer such as pictures, videos, etc. Without a monitor, a computer would still be able to do various computational work. But to make it truly usable, having a monitor is a must.

In earlier days, computers used to have slow & boxy CRT monitors. Today, monitors are much more advanced and come in thin and sleek designs. They also have higher refresh rates — up to 244 Hz — giving you a super smooth user experience, such as the LG Electronics FullHD 240Hz Monitor.

CPU stands for Central Processing Unit. A computer has to deal with thousands of calculations every second. The CPU helps achieve exactly this. It’s the part of the computer that processes different sorts of information at lightning-fast speeds.

Processors are sometimes called the brain of a computer. You’ve probably heard of the Intel processor that is common in most computers today. Newer generations have multiple cores and are multi-threaded, making them super powerful.

Products from Intel work well with a lot of computers. You can check out the Intel Core i9 Processor and Intel Core i7 Processors of the latest generation.

But if you want something a bit cheaper, you can check out the Ryzen 9 and Ryzen 5. 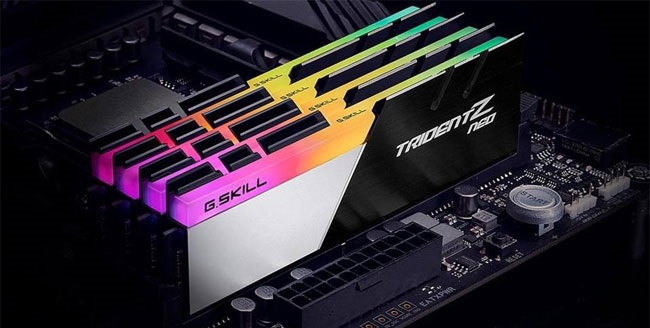 Computers need to store temporary data in order to perform various calculations and work. Similar to how humans store temporary information in their heads, computers use a memory unit called RAM to do this. RAM stands for Random Access Memory.

The RAM stores important data that a computer needs to access frequently from time to time. Accessing data through RAM is fast and efficient. This helps the computer stay quick and not slow down on heavy workloads.

Generally, the memory capacity of RAM is expressed in Gigabytes. A good computer today has at least 8 to 16 Gigabytes (GB) of memory. This makes them fast machines capable of getting a lot of work done in a short amount of time.

HDD stands for Hard Disk Drive. This is the most common type of storage unit found on computers. They’ve been around ever since the invention of computers.

These storage units are capable of storing data in bulk — easily reaching a few terabytes (TB). But unfortunately, HDDs are very slow compared to SSD. They have slower read and write times compared to their successor, the SSD.

For HDDs, we’d suggest the most popular 1 TB HDD 64 GB/s by Seagate.

SSD stands for Solid State Drives. They’re a relatively recent invention compared to hard disks and are getting more popular nowadays. SSDs are capable of reading and writing data at super-fast speeds.

If you want to make your computer a little bit faster, SSDs are the way to go. They cost a bit more compared to HDDs, but they’re more than worth the price.

Generally, most modern computers have both HDDs and SSDs. A common setup is to see a 256 or 512 GB SSD paired with a 1 or 2 TB HDD. This is a solid configuration to make your computer super fast and efficient.

A computer cannot display vibrant colors properly without a graphics card. A graphics card, therefore, handles all the graphics components and requirements of a computer.

They’re usually connected somewhere near the CPU so that they can both work together in rendering images and videos to you in vibrant, high quality. Their second name is Graphics Processing Unit.

Integrated Graphics Cards are built into the motherboard and closely work together with the CPU. Usually, they share the memory with the CPU and thus have limited working resources. This makes them a bit less powerful. Integrated GPUs are built by the manufacturer to display essential graphic content such as images, videos, and some simple games.

But, most people fuss about graphics cards because they want to play high-quality games at good resolutions. For this, you’ll need a dedicated graphics card.

Dedicated Graphics Cards are external graphics cards that are the most powerful. They have their own memory and don’t have to share resources with the CPU, thus making them super powerful devices. Notable among dedicated graphics cards are Nvidia and AMD graphics cards.

If you want to play high-resolution games or have work involving heavy graphic usages such as a photo or video editing, dedicated graphics cards are necessary. Although a bit pricey, they provide the maximum performance and thus are more than worth their price. 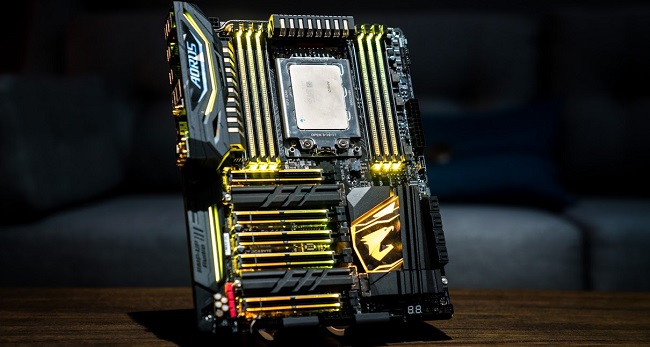 The motherboard is the component that binds everything together in a computer. Every component you’ve looked at till now is in some way connected to the motherboard. From there, all the components can communicate with each other smoothly and efficiently.

As this is the main board of a computer where every other component interacts, it’s called the motherboard or mainboard. It’s the longest board on the computer, making it easy to identify when you take apart your computer. Without it, a computer wouldn’t even work. Therefore, we can call it the most important part of the computer.

The ASUS ROG B450 Motherboard is known to be a solid motherboard rig with tons of features if you’re into gaming and heavy duty works.

A computer is capable of doing many complicated tasks. But you’ve to let it know properly what you want it to do, and for that, you need an input device.

The keyboard is a rectangular device with multiple rows of keys that let you type any language’s letters. Most common is the English keyboard, but you can find keyboards of any other language of the world as well.

Keyboards have digitized things like sending letters and emails and have transformed the world into a digital, global space.

Getting the mechanical keyboard from Razer BlackWidow would be the best decision for you.

A mouse is another important input device of a computer. It lets you move around on the computer screen with the help of a pointer. You get to select files, open images, play and control videos, and much more.

Laptops nowadays have built-in touchpads that try to substitute the mouse. But people today still prefer mice over touchpads because of how easy they are to use. Just point and click, and the world is at the palm of your hands!

There’s nothing like a high DPI, silent, and light gaming mouse. We’d recommend the Razor Viper or the Viper Mini.

Speakers are an external output device of a computer that can play audio at high quality. Generally, computers don’t come with a built-in way of playing audio.

Therefore, to listen to music or watch videos properly, you need to have speakers. Speakers have many lucrative features like high bass, spatial audio, and much more.

The Creative Pebble is a good budget speaker that can get the job done.

Computer Casing is a rectangular box, usually made of glass, containing all the essential parts of a computer like a motherboard, CPU, RAM, and others. It has dedicated slots for storing each component.

Building a computer is easy if you’ve got a casing, as it keeps everything nice and tidy. Cable management is super easy as well with Casings.

The NZXT H510 provides a solid glass casing with USB-C and other port support.

As the name suggests, the power supply supplies electricity to different components of the computer. It converts AC current from your home to lower voltage DC current that is easy and safe to use for different computer components. 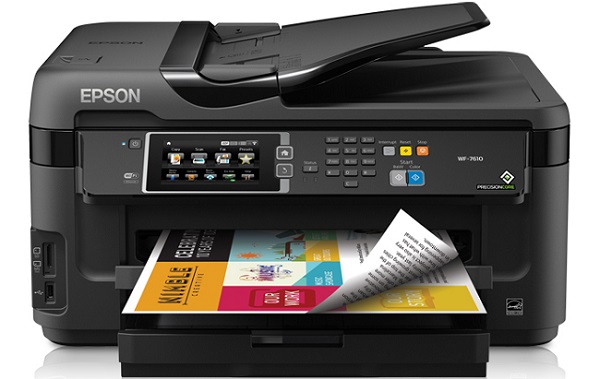 Scanners and Printers are a must-have for any office using a computer.

Devices that can scan any paper document into a digital form are scanners. Using them, you can edit documents and send them electronically by email.

Similar to scanners, printers are a device that deals with paper documents. It can print any digital document into a physical form. Printers can print in both color and black & white versions.

These two devices have revolutionized and digitized the work of offices that have to deal with multiple documents every day.  They’ve thus made our lives a lot easier.

Cannon is known for making great printers, so we’d definitely recommend Canon G3260.And as for a scanner, you can get the Brother DS.

Do I need to buy all the parts as mentioned in the post to build a good computer?

No, you don’t. If you want, you can get away with just buying the essentials. That being said, if you can afford it, we’d suggest buying the additional parts as well. They’ll make using your computer super easy and efficient.

It’s absolutely okay to buy second-hand computer parts. Even if a part is one or two years old, they’re still usable in most cases. Be sure to inspect the parts yourself beforehand before buying them.

Not really. The built-in graphics card’s main job is to display pictures and videos properly. For playing games, what you need is a dedicated graphics card. Some low-resolution old games will run properly, but you’ll be limited in your options.

If you want to save money, we’d suggest buying a second-hand dedicated graphics card.

Is it okay to not have an SSD?

Yes, it’s absolutely okay not to have an SSD. If you’re not after fast speeds and just want a normal, usable computer, having only an HDD is just fine. But for faster boot times and a more swift user experience, we’d recommend buying an SSD if you can afford it.

Is there a cheaper processor alternative other than Intel?

As a person living in the modern world, it’s a must to know how a computer is built. Hopefully, by reading this article, you’re aware of the different parts of a computer to build one yourself.

We’ve talked about all of its necessary components, and also some additional parts that make using a computer super easy.

If you’re looking to buy a new computer, this post can help guide you. Hope you’ll use it to the best of your needs. Cheers!